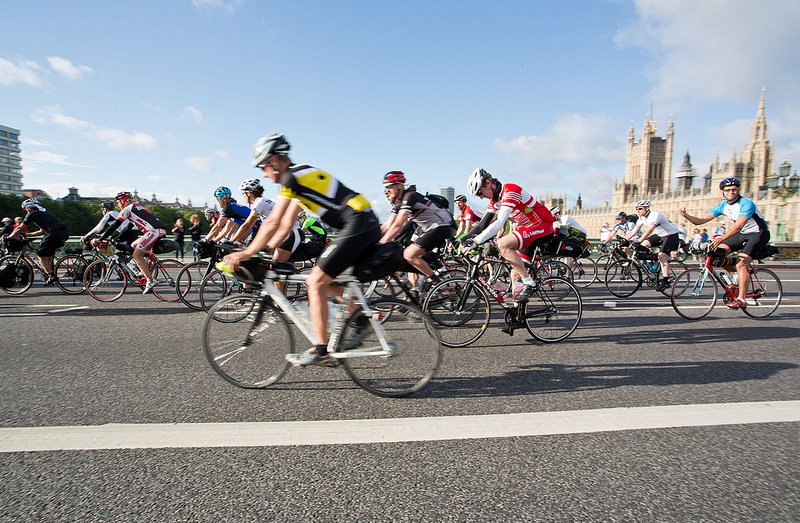 Riders left Westminster Bridge under the chimes of Big Ben for a short group roll out before becoming autonomous at the Elephant and Castle and heading for the English Channel.  It was unanimous that the Port of Dover was the most expedient UK jumping off point and despite Davidson Kingan discovering his passport missing presumed stolen, all riders eventually made the crossing safely with destinations split between Calais and Dunkirk.  Kristof Alleaert was the first to port and joined by Anton Hunt as the first to set sail.

Allegaert was the first rider to appear at control 1 on the Muur van Geraardsbergen, topping the climb at 22:18 CET.  The Flemish rider’s local knowledge clearly proved useful and he enjoyed a short respite at the Taverne Hemelrijk before continuing on to Croiseau before bedding down for the night.  Next in to CP1 was Lithuanian Rimas Grigenas at 22:37 who successfully persuaded the kitchen at the Taverne to extend their serving hours a few more minutes and fuel him on well into the night.  Grigenas pedalled well past 03:30 before a short stop of no more than two and a half hours.  Richard Dunnett was third in, closely followed by Ed Pickup shortly after 11pm and the pair chose to take advantage of the hostel accommodation at de Gavers.  Dunnett was the first to leave and first on the road on day 2 and rolling before 4:30am.

Not perturbed by a night on the cobbles riders continued in to the control and the hostel to within half an hour of Dunnett’s departure with the trio of James Jordan, Nicholas Pusinelli and Matthew Wilkins arriving at 23:32 and Chris Holden, Ed Jones and Anton Hunt completing the top 10 either side of midnight.

Finnish rider Mikko Makipaa “fresh” back from London – Edinburgh – London to commence the Transcontinental came through at 2:10, brushed his teeth and appeared to seamlessly start a new day, riding non-stop through until Sunday afternoon before stopping for a little over 3 hours near Bastogne, some 30 hours after departing the English capital.

Sergei Konov opened proceedings on Sunday morning as the Chapel opened its doors.  Shortly after Nick Dodd was spotted climbing the Muur for the second time, this time from the correct side, after becoming disoriented leaving town.  Unfortunately for the approaching Colin Woof, Dodd was offering directions to the Muur.  Woof was the only rider not to report to CP1 but his confused tracks were evident close by.  Juliana Buhring arrived looking fresh a little after 9am before going in search of coffee and the bakery in town.

Brian Welsh took an extended lunch at the Taverne as his RAAM training run took off to a steady start and he got to grips with self navigated travel and it was a wrap at Kappelmuur a little after noon when Zoran Mihelcic carried the lantern rouge to the Kapel along with stories of mis-adventures in Kent and a 400km ‘tourist’ route.  One might expect that the shoe may be on the other foot when riders get close to Zoran’s home of Croatia, something this author has experience of.

Sunday riders have been making steady progress southeast, all except for Nicholas Longworth who’s supporters equipped whether his tracker was faulty as it seemed to be heading back to London.  The source of Nick’s 10 mile starting loop out of de Gavers remains a mystery but it would have to be one good bakery.