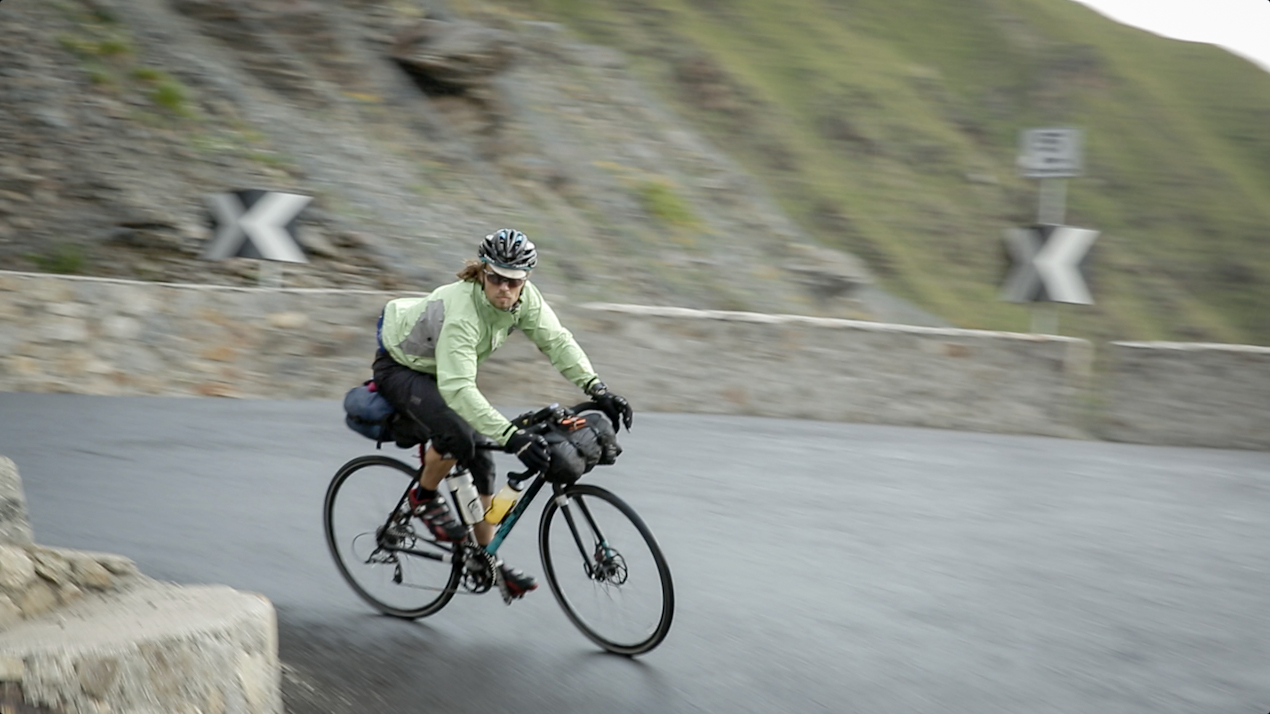 Day 5 of the TCR started with more riders at the foot of the Stelvio, ready for a dawn raid on control point 2.  Rimas Grigenas and Matt Wilkins met up in Prato allo Stelvio to enjoy midnight pizza and Ed Pickup got the jump on the pair by making a start at the pass before bedding down 8km up.  In the morning he became the third rider to CP2 at 7:57am CET.  Hot on his heels was Australian Matt Wilkins at 8:11am and the two riders exchanged greetings on switchback number 3 as Ed descended the way he climbed.

So far all racers had chosen a 96 hairpin return trip to Prato before continuing East.  Wilkins was tempted to be the first to descend to Bormio and take on the Passo di Gavia but was feeling the last 24hrs of altitude gain in his legs and followed suit, as did Grigenas who revealed that his sleep strategy involved folding a survival blanket over himself and being woken up by the shivering as he became cold in the hours just before dawn.  Perhaps the morning wasn’t cold enough in Prato or the need to sleep was greater, but he crested the climb a little over an hour later (9:22am) after sleeping in.  James Jordan reported in half an hour later (9:50am) and had spent the previous evening in a bus shelter.  All the riders through had been sleeping 4hrs per night on average and felt that is sustainable.

Someone who has averaged far less up until recently is Mikko Makipaa “1.5h, 3h and 2h of sleep so far, Real rest before climbing to Stelvio” he tweeted and one could be forgiven for wondering what real rest means for the Finnish Randonneur but a 14hr+ stop followed.  Laundry done, sleep debts paid off and well fed Makipaa rode the pass on the afternoon of day 5 as the weather started to turn and after a large pizza at the Hotel Porego was the first to descend the western side of the pass   Determined to see as much as possible en-route and not afraid of some serious effort, Mikko was headed toward Lake Garda via the formidable Mortirolo Pass which is described by some of the best in the pro peleton as one of the hardest climbs in the Alps.  Respect is due.  Ed Jones was next in for a beer and a feed at 19:00 and also returned the way he came.

Overnight day 4/5 the first race withdrawal had also come through.  Zoran Mihelcic reported in offering no excuses, just a simple “I’m done” and headed to Zurich to catch a flight.  Three other riders; Recep Yesil, Jason Woodhouse and Chris Ellam, who had been struggling to get back on terms with injuries and illness decided to continue but disqualify themselves from the race and get to Istanbul via other means, a mixture of planes, bicycles and automobiles.  These “honourable self-disqualifications” go to show that a transcontinental bicycle ride is bigger than any race and a much personal endeavour.  The riders choosing to set themselves free of the race rules and follow their adventures to Istanbul on their own terms.  From the TCR team this is heartening to see that the will to continue is not extinguished with chances in the race and we look forward to celebrating with them in Istanbul however they get there.

Day 6 started as day 5 finished with howling wind and driving rain settling in for the day, Nicholas Pusinelli and Anton Hunt headed back to Prato after a night in the Albergo Forago, hoping that their brake pads would last the descent in inclement conditions.  Sergei Konov checked in for breakfast starting a TCR’s busiest day of visitors to CP2.  On a sunny day the Stelvio Pass is crowded with cyclists, motorcycles and sports cars during the day making TCR riders difficult to spot, when it rains like this though, only those who have little choice are on the mountain and half of those are in this race.  Erik Nohlin pushed hard and arrived shivering, soaked to the skin and made a dash for the nearest shower and crashed out in the lobby of the Forago to get warm before attempting the descent.  Anthony Hawke arrived with new wheel after a series of mechanical disasters delayed him.  Chris Holden was presented with fresh a Cima Coppi jersey from one of the pass’s souvenir sellers when he summited and she found out what he was up to.

Steely Juliana Buhring checked in for lunch having passed at least two TCR racers on the way up the climb before the afternoon’s check-ins congregated in the Porego Hotel Pizzeria.  Nick Dodd, Shaun Timberlake and Colin Woof joined the party and riders ate pizza and pasta in double portions while trying to wait out the heavy rain.  Colin shared the story of how he came to be in the race – his friends had a whip-round for the entry fee and signed him up after he protested that he would but he couldn’t afford it, then he had to go through with it.  Juliana put the other racers to shame by enjoying a swift whiskey for the road, filling the front of her jersey with newspaper and heading out first.  Dodd and Woof donned bin bags some while later to protect them from chill on the descent.  Shaun Timberlake became the 5th withdrawal with acute knee pain.  He joins Holden to reach Istanbul by rail.  Iain Findlay looked like being the last man to CP2 before the sunset deadline for a crew presence which relieved supporters who lost his tracking signal yesterday, signal restored, he descended again straight away with a gap in the weather.  Other riders tracks seemed to have stalled half way up the climb.  Davidson Kingan reported he would finish the pass in the morning but Eelco Weijmans carried on to beat the departure of the event car.

[Update: Daniel Wilson and Sebastian Gassner just checked in at the pass as the crew were leaving but approached from the west side instead of the classic Stelvio climb of the 48 switchbacks and now face the dilemma of whether to descend and climb the pass again in the morning or head on for Istanbul and miss the CP2 requirements which would relegate them in the standings]